Spring in Quebec is celebrated by hoards of hungry people migrating en masse to sugar shacks or cabane a sucre. After months of cabin fever and frostbite, finally the weather is nice enough to break hibernation and play outside.

Where did this celebration come from? Well, in the springtime the sap of maple trees “runs”. This means it’s the best time to tap them and collect the sap for maple syrup production. In the past, sugar was difficult to obtain and maple syrup could be another crop to harvest when nothing else was growing.

So, the maple harvest was a thing, but to do this took labour and effort. What better way to fuel a farmer and celebrate this maple harvest than with a feast? This spring feast still goes on today in modern Quebec.

What do we typically eat? Well, stuff that’s available after long and cold winters: pickles, pork, beans and bready things. I went to a sugar shack last weekend and this is what was on the menu:

And yes, everything is somehow cooked in or served with maple syrup. Who cares about ketchup on eggs? Maple syrup is where it’s at! Boy, did we feast. 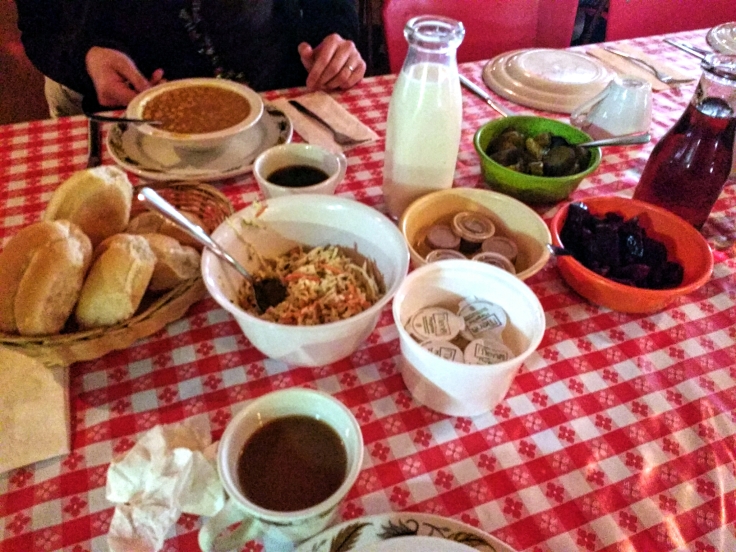 Ever get to the point of eating where you don’t know if you could even swallow another bite? Like, you have to get up slowly from the table or you might just be painting the floor with everything you just put down? That’s what happened to me, and I don’t regret a single gluten filled calorie.

But no, this isn’t a story of how I got diabetes. After the feed comes the hike!

Beside the sugar Shack is Mont Saint Gregoire; a relatively small mountain in the eastern townships of Quebec. At this time of the year the trail to the summit is a muddy and icy mess. The snow takes on a granular quality, like what’s left of a slushie after slurping out all the blue syrup. Hiking up the steep and frozen incline is tough, and coming down without mud or slush on your pants even tougher.

Thankfully we brought some hiking poles and a “slow and steady” attitude. It took about an hour and a half to get to the summit, including stops for pictures and detours. Once we got to the top we were greeted with rock and stunted trees and a gorgeous panoramic view of the eastern townships.

The surrounding land is flat except these little bumps called Bromont and most Saint Hilaire and others. This means we could see countryside for miles and miles. This sure is a weird spot to put a mountain? Maybe this place used to be an ocean floor and Mont Saint Gregoire was a coral formation?

The neat thing about the summit is that there’s a lot of wind. We saw vultures swooping and gliding around, playing on the wind currents. We were high enough that we were looking down at them flying, which is an unusual sight.

I had a couple near slips on the way down, but I was lucky enough to remain vertical. We celebrated at the sugar shack (conveniently at the trail head) with two servings of maple taffy – hot thickened maple syrup poured over snow. We had come at the end of the day so there were sugar crystals in the taffy… It was heavenly.

I was super happy to get this first adventure of the season under my belt. We made it home with (still) full bellies, our pockets full of pilfered doughnuts, and some great memories of a fun hike. Can’t wait to do the next one!