I had a few hours to spare, so why not clean the old peashooter, eh? Everyone, I’d like to introduce the Henry Arms US Survival Rifle, otherwise known as the AR-7.

This isn’t a competition shooter and it doesn’t pretend to be. It’s a no frills, ugly-cute kinda rifle meant to be a tool to help you survive in the remote bush. I use it as a weekend plinker to hunt empty pop cans, torn out magazine pages, and the occasional paper plate. 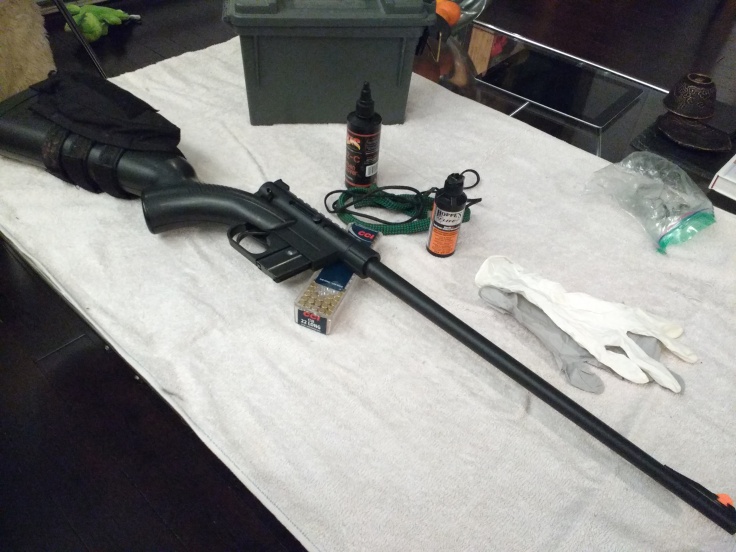 The main selling point of this rifle is the fact that it disassembles and stores in its own hollowed out stock. There’s really only four parts to this gun: the barrel, receiver, magazine, and stock. It’s a simple thing (like the owner). To start the cleaning, I unfastened all the parts.

To loosen up any carbon on the barrel, I ran a patch moistened with this carbon remover I have. I worked it all around the dirty bits and pushed it through in the same direction as the bullet. A cleaning rod works for this, but I suppose a wooden stick would do just as well. 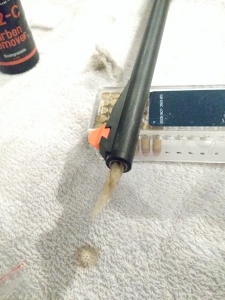 After letting it soak for a few minutes, I used this thing called a snake. It’s designed to scrub, dry, and oil the barrel all at once. I applied a little solvent to the scratchy part of the snake, and oil to the end loop. I pulled it through the barrel twice, also in the direction of the bullet. This cleans and oils the barrel all in one pass.

Next, I removed the bolt, springs, and spring guide. I wiped a wet patch all around the inside of the receiver and let the solvent soak a bit. The grimy excess wiped off easily and I let it dry. The bolt itself got the same solvent wipe a light oiling treatment. 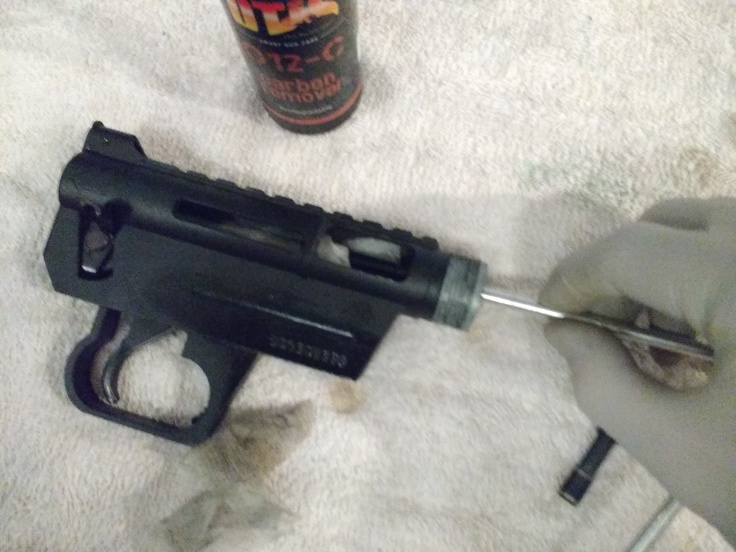 Generally I leave the mechanism alone. I haven’t cleaned it in a while so I thought it’d be worth it. The trick to cleaning this part is to take a picture before so when springs and doodads pop off you’ll know where to replace them.

To the best of my ability, I wiped everything down with a solvent patch, wiped dry and wiped it again with an oily patch. A flashlight or headlamp really helps for this part. 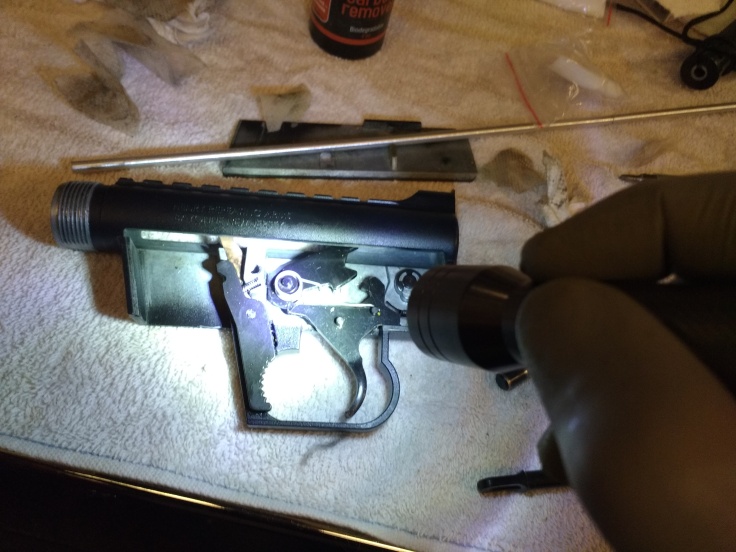 After that it’s just a question of putting everything back together! I made sure the action worked smoothly by cycling a few snap caps through it. No problems!

Pro tip: when replacing the bolt, the firing pin should be cocked back, otherwise the spring guide won’t enter fully. To do this, slide the bolt in and use a rod to push it back and cock the pin. If you use your finger you will hit the extractor and maybe hurt yourself. Remove the bolt again and insert the spring guide, springs, and bolt.

I suppose a good rule of thumb is to clean the thing every two hundred rounds or so. It’s such a simple mechanism you could probably stretch that waaaay out and still have it work reliably.

In a future post I’ll talk a little about the different aspects of the rifle, what I like and not like about it, and maybe some action shots. Until next time!